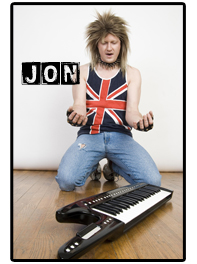 Wanting to be a rock star after both Nikki Sixx and Tommy Lee married supermodels, Jon began acquiring ax-shaped guitars and roto-toms at an early age. However, Jon’s life changed dramatically when the song “Axel F” was released. “It was one of the first songs that was all synthesizer…it was massively gnarly. Synthesizers were taking over the world… I figured that by 1989 ALL music would be created by synths. A music war started between the keyboard guys and the drummers/guitar players. I made a choice. You can win any war if you choose the right side.”

Always a slave to technology, Jon recently upgraded his Commodore VIC-20 computer to a Commodore 64 and considers any computer that doesn’t hook up to your TV “a rip-off.” In a recent interview by Eighties Keyboard Player magazine, Jon was asked his opinion of bands and artists of today going back to recording real violin and cello players in their music. He replied, “C’mon…do you really think you can simulate a synthesized string patch using rosewood and horsehair? As if…”