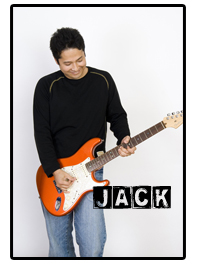 Being scoffed at in his youth by his classmates both for his ethnicity and the fact that he owned a Sears Tele-Game System instead of the authentic Atari console, Jack saved every quarter he could find lying on the floors of the local arcade nearby to purchase strings for his baritone ukulele. Inspired by the perseverance of tv characters like Starbuck from Battlestar Galactica and Ralph Hinkley from the Greatest American Hero, Jack spent countless hours practicing by listening to cassettes of recorded 45’s slowed down to 33RPM. One day when he broke his turntable using the stylus to show off his scratching abilities, he was given a distortion pedal by his parents to console him in his time of grief. After days of researching, Jack soon understood the importance of 9-volts and began quarter-fishing once more in order to purchase the virgin Duracell battery that would bring the pedal to life and, thus, open the doorway to a new and better way of living.